Bharathiya Rishis were so advanced and they were able to arrange syllables in an order which when repeated in that order in proper frequency and tone brings out the proper form (roopam) in the atmosphere.This shows how sound and form are closely related and the excellence of Bharathiya Rishi parampara in formulating this. Bharathiya Rishis had extensive knowledge of the science, relationship between Vigraham, Yantram ,Mula Mantram and the impact of these on the Universe.

Below images shows Sree Chakra image from Tonoscope and principle of Hologram. 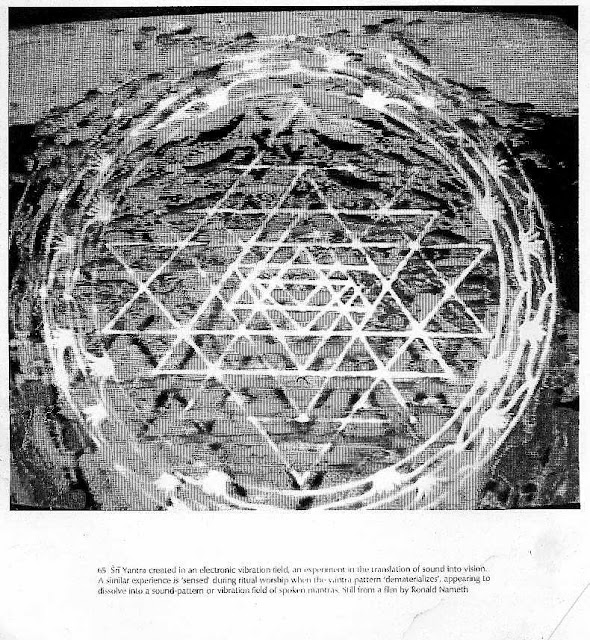 Scientific analysis of Sree Chakra taken from the speech of Jagadguru Swami Sathyananda Saraswathi Tiruvadikal. Listen to the concept in Swamiji's own words below.http://youtu.be/cjefOwWbfXI

Popular posts from this blog

By Sunil Nair December 24, 2011
It is a common custom followed to tie a black or black and yellow thread around the the waist of a Newborn at the 28th day.Initially this custom was followed  exactly at the 28th day after the child was born.Now since people are pre-occupied with work this ceremony is conducted on a Holiday and extends to 29th or 30th day.Majority of the people do not know the significance of this ceremony why it has to be on the 28th day. There are 28 stars associated with our system starting with Aswathy,Bharani and going up-to Abhijith (28th Star.2.5 Nazhika). Normally Astrologers take only 27 stars into consideration because Abhijith has a short time duration when compared to other stars.But Abhijith is strong during the period when it is present.28 days constitute a Chandra Masa(Moon Month). In 28 days these stars will come face to face with the Moon one by one.The rays from the star will get mixed with the rays of the Moon and Somam( A subtle matter in the form of liquid ) whi
Post a Comment
Read more

By Sunil Nair August 06, 2012
Ramayana Masam is observed to bring out the importance of Ramayana and not of the month.Karkidakam month is often called  "panja masam"  (lean season).New ventures and auspicious functions(Wedding,House Warming,Vidhyarambham etc ) are not held during this month.Karkidakam marks the begining of Dakshinayanam(southern movement of the sun). Inclement weather,poverty and diseases are the highlights of this month.The effect of which is reflected in mankind and in all living  beings. As per Ayurveda shastra this time is good for all health treatments such as Pizhichil ,Uzhichil etc..The change in the sun's path has significant impact on human beings also. Human body and nature are closely associated.Both bodies are made up of Panchabootham(Earth,Water,Fire,Air and Sky). Any change in Prapancha Sareeram(Nature) has a direct effect on Human body and the society.This is based on the Prana (Life Force) and the body.Phenomenon of Uttarayana and Dakshinayana based on the celesti
Post a Comment
Read more